A few days ago, I picked up some seed starter and some plastic thingies to turn flats of plastic pots into little greenhouses. I also picked up some Brandywine tomato seeds, but held off on getting more seeds because I knew I had some leftover from recent years, as well as a few I'd saved from organic produce this last year.

So, I planted some of the Brandywine tomatoes, and the some older seeds: The last of the Black Cherry Tomato, Chocolate Stripes Tomato, and Northern Lights Tomato. I also planted some Cherokee Purple, but not the last of my seeds, and some older Lemon Cucumber, and from last fall, the seeds of some mild Habanero peppers I got at the local organic food store.

The last thing I planted was a surprise. Quite a while ago, I had a volunteer squash plant that tasted like a cross between pumpkin and spaghetti squash, both things I'd grown the previous year in that garden. It was good enough that I saved the seeds, hoping to plant them the next year, but life happened. I thought they were long lost. In amongst some older garden stuff, I found the envelope of those seeds! It's probably a lost cause, but I planted some of them, with a prayer.

Planting older seeds is always a gamble, of course, but it's early enough in the season that I can put too many seeds in each pot and hope that at least one of them will sprout. And if not, I'll plant something else in that pot, only a couple of weeks behind the newer seeds. But that hybrid was really tasty, so wish me luck!

Here's the little babies, who are hopefully starting to awaken in their new soil beds. 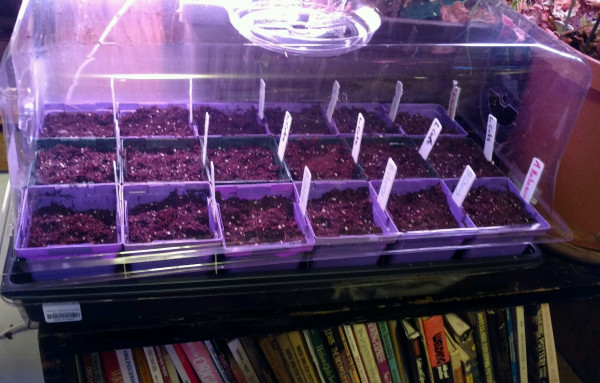 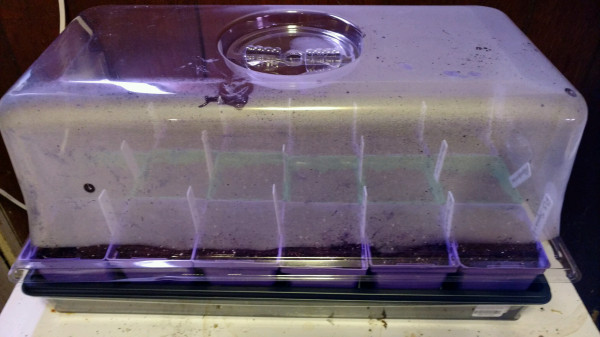 (Of course I used the purple pots!)

This entry was originally posted at http://wyld-dandelyon.dreamwidth.org/443891.html. Be welcome to comment wherever you prefer.
Collapse