Yeah, the con report is a little late. Such is life.

I got to the hotel later than planned (the dentist trip the day before slowed me down), and piled the stuff I would need to teach people painting in the Midwinter Faire onto the little luggage cart I mostly use to take a few of my many instruments to filks, got to the usual area only to see no evidence of that event happening. Well, I thought, maybe they moved it. After a quick walk to programming ops, I found that they'd cancelled the event (too bad they didn't tell me, I would have brought less painting stuff). I also found that they were looking for people to add to several panels I was very interested in, one of which started immediately, so I took my paints and canvasses and spare paper and table cover and all to that room to talk about the allegation that there are only 7 stories (well, seven plot types, as it turned out). It was an interesting panel, and I did some sketching underneath my notes for the panel. 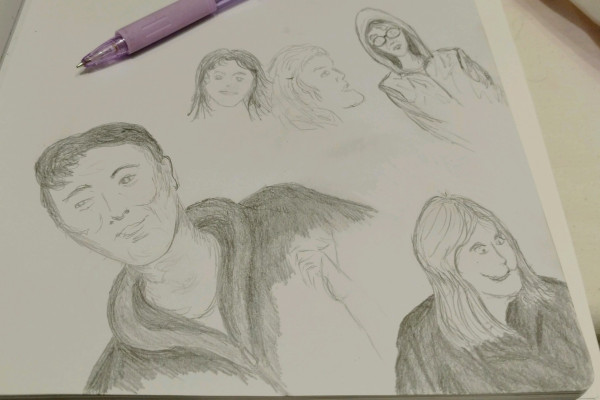 It turns out my in-panel doodles are much better when I expected to spend that time teaching art than they are when I am gearing up my thoughts to talking about writing, though I think I held my own on that front too.

Afterward, the art show found me space to hang some art (in addition to the Capricon Challenge piece) and I did that. This pic was taken before they printed the bid sheets. 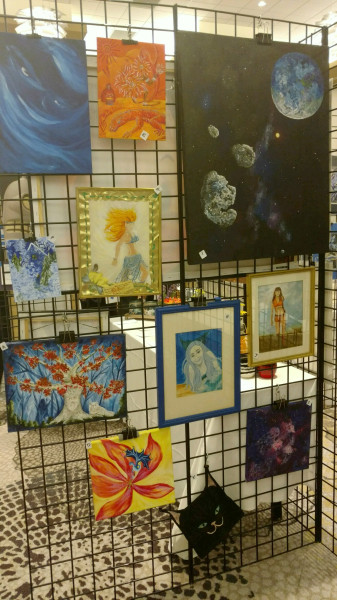 The next morning, I got up very early (for me) to talk about Libraries in Space--or more specifically about what a library of a new colony on Mars would be like. That sounds like a planetary library to me, but that didn't make the topic any less interesting.

The final panel I was on was Theology in SF, which was fascinating. It was very different from the other excellent religion in SF panels I've been on at various cons in past years, which was due, partially, to the focus on deity rather than religion. I think it was also partially due to the fact that the panelists this time were primarily people fascinated by the study of religion, rather than primarily people who write science fiction--not that the two are in any way exclusive, because they're not, but the focus was more on views of God or Gods and how that affected various science fiction works, and less on how to make a fictional religion believable. I enjoyed it very much. I was also thanked afterward for representing the Pagan worldview, a thing the audience member in question said she hadn't seen much of. I guess either the popularity of Paganism at conventions is down or, more likely, the rise of the Religious Right and the "alt right" has made a lot of us back at least partway into the closet.

After that, I spent time painting and doing all the things that I go to cons for--chatting with people and filking and panels. One of the highlights was working on my painting of Cathy during her concert (and teaching some painting there, after all). During the filks, I sat with my sister. She painted, being of the firm opinion that a filk provides her with a good excuse to do art. I also painted during the filk, in between singing and playing songs myself and playing along with other people.

Here's a new detail from Cathy's painting. She suggested I add a sea horse, but when I saw a pic of an adult sea horse with a young one, I knew the painting needed more than one. 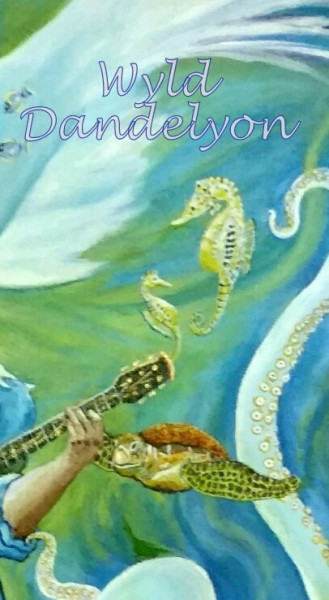 The con wasn't perfect, of course. I had to tell the Green Room staff how disappointing it was that they didn't keep the ingredients of the stuff in the room so I could tell if I could eat it or not (I've been eating in the green room with these food allergies at Capricon for years now, and in past years, they kept the ingredients panels from boxes in a spiral notebook). So I didn't eat much there. The ice cream in the con suite wasn't safe--but to my shock the hot dogs were (they still had the box!). Also, I brought some food. So I didn't starve, and more importantly, I didn't get sick, which I can't take for granted when I'm not cooking from scratch at home. So that has to count as a win.

And I sold a piece of art -- my Resist! black cat-eared hat. It didn't net me much income, but was a little more than the hanging fees, so overall, also a win. And to think I put the hat into the auction more as a political statement than expecting to sell it!

I guess I should go get some pink t-shirt material and make at least one more hat.

This entry was originally posted at http://wyld-dandelyon.dreamwidth.org/444522.html. Be welcome to comment wherever you prefer.
Collapse