I went to see Wisc. State Rep. Fred Kessler talk about the case (Whitford v. Gill) against the Wisconsin redistricting that was recently ruled unconstitutional, and which Wisconsin's GOP government is appealing to the Supreme Court of the United States.

He first introduced himself, talking about his history and how he got into politics. He was first elected to serve as a representative in Madison in 1960, when he was a very young man, and he has also served as a Judge before returning to working as a politician. 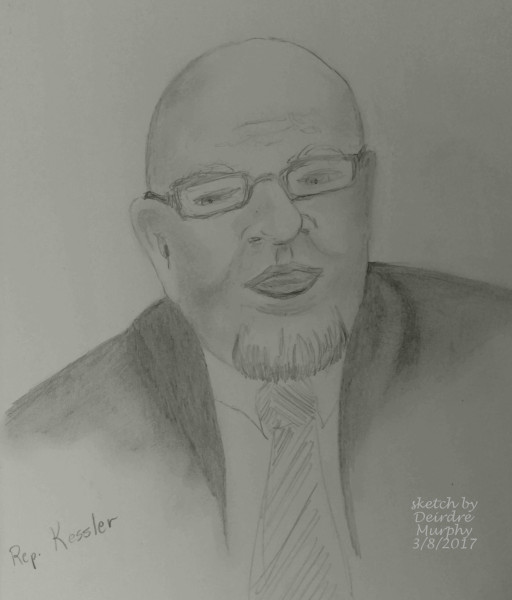 He gave us this background so we would understand why he immediately recognized how unfair the current electoral map in Wisconsin is. He immediately started talking to people about whether a legal case could be made to challenge it. I don't have all the names, as most of the notes I was taking were in the form of sketching the speaker, but it was interesting to hear how the case developed. Little things mattered--for instance, one of the people invited to a meeting brought his then-girlfriend, who agreed that this was a big issue, and who volunteered to do some fund raising, as she knew people who she thought would agree that this was an issue of basic fairness and very important to the continuation of our democratic form of government.

She came back to the group at their next meeting with pledges for over $150,000.

Now you have to understand that this money did not go to the lawyers--they are donating their time, and won't get paid unless they win--but this money meant that the lawyers could start the process, doing all the little and big things that are needed for a lawsuit, from the trivial (filing and serving the lawsuit) to the most vital and most expensive--paying for copies of documents as part of the discovery process, hiring experts, paying them to do the research necessary to have a properly informed opinion, depositions, and so on.

He talked about the importance of choosing plaintiffs who were representative of the various different districts in the state--and the importance of having one of those be a lawyer and law professor very familiar with the process and with the implications of the various choices that would have to be made in the course of the lawsuit. He talked about his worries that a Republican-appointed judge was assigned to their case, and how that Republican judge ruled quite clearly against the unconstitutional gerrymandering that the GOP created in Wisconsin.

He says that if the Supreme Court rules for the plaintiffs in this case, upholding the lower court's ruling that Wisconsin's districts were unconstitutionally gerrymandered, he thinks that this case will prove as important to our country as Brown v. Board of Education. He talked about GOP efforts in a number of states and admitted that the Democrats had done some gerrymandering, though not to as severe an extent, in Massachusetts. He said that it is very important that a standard be established. In his opinion it doesn't much matter who is tasked with drawing up the maps if there is a very clear, fair legal standard.

As to that, another thing that happened early on was that someone knew about then-unpublished research that would allow a non-subjective test of the fairness, a way to measure whether a map was fair not only by race, but by party affiliation or political philosophy. He felt it was essential to winning this case that this study existed, and that it was accepted as a valid test by the Court.

He also said that there were four important legal points that had to be met in order to win the lawsuit--the courts had to find the following:

Now, my lawyer readers should keep in mind that I'm doing my best to report his words accurately, but I am not a legal scholar and did not record the meeting. I am relying on my memory and a few scribbled notes on the back of the meeting agenda, so I might have gotten some important nuance wrong. But this is accurate to the best of my recollection and understanding.

At the end, he took questions.

One person asked if this government in Wisconsin was elected unconstitutionally, then are they legitimately in office? Rep. Kessler said that is a very interesting question, and no one knows the answer. For instance, if they are not legitimate, then no one knows whether some of the more outrageous laws that were passed by the people elected using an unconstitutional map can be challenged in Court as invalid.

I asked if there is support for eliminating the Electoral College. He said that he is not convinced that is a good idea, and talked about the chaos that the Republicans caused trying to make sure that the Florida recount could not be accomplished in a timely and accurate fashion, and said that he didn't want to see that chaos on a national scale.

In answer to another question, he noted that, now that the GOP has instituted their very restrictive voter ID law, he anticipates that they will try to eliminate Wisconsin's election day voter registration and early voting provisions, to further suppress the vote.

It was a small group, perhaps in part because of the Women's Rally today, but clearly there were more questions at the point when the regular Southside Democrats' agenda had to be hurriedly finished, since the public library was about to close. Some of the attendees headed to a local pub for more discussion, but we had other errands to do and one of the stores we needed to stop at was closing shortly.

The meeting was definitely interesting, and I was very glad to hear from such a careful and informed person that he is very optimistic about what the Supreme Court ruling on this matter will be.

This entry was originally posted at http://wyld-dandelyon.dreamwidth.org/444800.html. Be welcome to comment wherever you prefer.
Collapse